The first show of Summer! Seems like maybe a bit more Jazz this week will help cool us off...plus a longer than usual selection to celebrate one of the birthday's listed below and there you have it...hope you enjoy! 7PM, exclusively on WBKM at www.wbkm.org

And here it is: http://media.blubrry.com/ahmetshouse/paradigms.bz/wbkm/AhmetsHouse06242012.mp3  Listen or download by clicking the link. This Sunday is Father's Day in the US and I can't think of a better place to celebrate it than in "Ahmet's House"! Join Tony for some family music as we scour the Atlantic catalog for fathers, sons and daughters making music. Two birthdays to celebrate plus, Part 2 of our recent conversation with Phil Carson about the band Yes and their two definitive albums...Fragile and Close to the Edge. 7PM Sunday, only on WBKM! www.wbkm.org 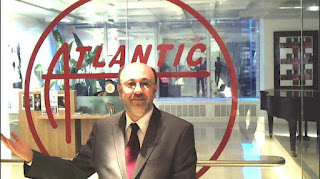 Bring It On Home---Led Zeppelin

Show archive is available by clicking on the link:  http://media.blubrry.com/ahmetshouse/paradigms.bz/wbkm/AhmetsHouse06172012.mp3

Coming up on our next broadcast of  Ahmet's House scheduled for Sunday June 10th, we will hear from our good friend Phil Carson, former Atlantic exec in London. Join us as we talk about one of our favorite bands...Yes! From the bands historic beginning opening for Cream, through their groundbreaking trio of albums in the early Seventies, Phil was deeply involved with the band. Lots of birthdays to celebrate too...so we hope you can join us, or access the show via the link posted below. 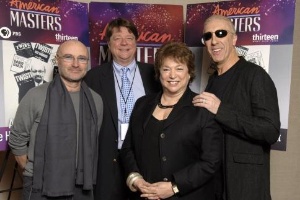 Phil Carson (next to Phil Collins)

No AH show on June 3rd

Due to an extensive travel schedule this weekend, Tony will be unable to air our "Ahmet's House" program this Sunday. However, we will soon be able to share a MAJOR ANNOUNCEMENT regarding Ahmet's House! Keep checking this blog and be sure to listen each Sunday at 7PM ET.
Posted by WBKM.org at 12:00 AM No comments: